Harnessing the power within us is emerging as a powerful weapon to fight cancer. The Avner Pancreatic Cancer Foundation is currently funding two projects that are focused on using immunotherapy against Pancreatic Cancer. 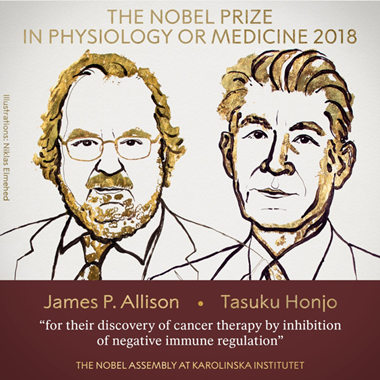 Harnessing the power within us is emerging as a powerful weapon to fight cancer.

The discovery of immunotherapy made the headlines earlier this week when Professor James Allison (University of Texas) and Professor Tasuku Honjo (Kyoto University) were jointly awarded the 2018 Nobel Prize in Medicine for “discovery of cancer therapy by inhibition of negative immune regulation”.

The two scientists spent decades researching different strategies for taking charge of the immune system. Both looked at what happens when you inhibit certain brakes on the immune system, and the effects on cancer.

Our immune system activates naturally to fight cancer, however its ability may be reduced in some people.

Allison and Honjo studied proteins which act as brakes on T-cells. Allison studied one called CTLA-4 and was the first to come up with the idea to inhibit it to enhance the immune response. Using an antibody to block CTLA-4, he was able to successfully unleash the immune system to fight cancer cells.

Honjo discovered another protein called PD-1, which is expressed on the surface of T-cells. He found too, that inhibiting this protein would boost the immune system response.

Targeting both proteins have now become part of a common treatment known as ‘immune checkpoint therapy’, which is used for a variety of cancers. For some people, even those with advanced cancer, results are dramatic.

Immunotherapy has been suggested as a new pillar of cancer treatment, comparable to the development of chemotherapy. It has been shown to drastically reduce spread or metastasis of cancers which were previously very difficult to treat, such as lung cancer, melanoma and lymphoma.

However, as with a lot of treatments serious side effects can occur and the therapy is not effective for everyone. It also works better in some cancers and not others, and strong effects are still yet to be seen in Pancreatic Cancer.

From the quiet achievers, to the Nobel Laureates, all our scientists are working tirelessly to help us live longer, healthier lives. And discoveries like these, show just how important investing in research is.