A heart-warming end to a big year

Dean Gorddard was diagnosed with Pancreatic Cancer two and a half years ago. Since then Dean’s bravery and positive attitude has shone a light on the harsh reality of Pancreatic Cancer in a unique and special way.

Dean met with the Avner Foundation earlier this year and expressed his desire to fundraise for us. He believed he could inspire his friends and family, and their colleagues to get involved in a unique and authentic way to raise awareness and funds for medical research for Pancreatic Cancer.

Through one of Dean’s best friends, he was introduced to a group of people that he had never met before who worked at AMP and were looking for a fundraising challenge. Within a few months the bonds of friendship had been formed and this inspired group, along with Dean’s family here and overseas raised enough money to fund an Avner Foundation Innovation Grant.

The research that Dean and his group now support through the Innovation Grant is led by Dr Zaklina Kovacevic at the University of Sydney and involves a unique frontier drug and a protein that suppresses Pancreatic Cancer growth and metastasis.

This week, Dean visited Dr Zaklina Kovacevic and the broader research team that she works with.

Dean toured the lab and was given a presentation by the team’s senior researchers that showed how the frontier drug that they have developed can turn the metallic elements that a cancer cell feeds on to poison and destroy itself. 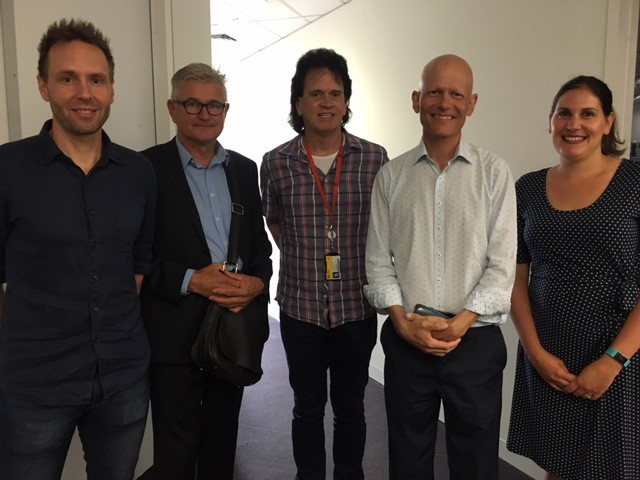 Dean heard how the team were using the cancer cell’s own defence system to expedite the delivery of the frontier drug to reach its nucleus, and how Dr Zaklina Kovacevic’s research helps inhibit the cancer’s ability to use the surrounding stroma (scar tissue) to its advantage, weakening its supportive environment and increasing the efficiency of the drug’s delivery.

We are delighted to end the year with such a positive example of how the Avner Foundation, our supporters and researchers, are working together to find a cure for Pancreatic Cancer.