The glittering Ivy ballroom was awash with purple earlier this month when over 350 guests attended the Avner Foundation’s 10th Anniversary Sydney dinner kindly hosted by Woolworths Limited. Held on the 1 August, the dinner marked our biggest milestone yet: raising a staggering $10 million over the 10-year history of the Foundation.

When Caroline and Avner started the Foundation back in 2008 their dream was to raise $1m to invest in Pancreatic Cancer research. With the help of our corporate sponsors and the support of families and friends affected by the disease, we have hit ten times this amount, and the figure continues to grow.

Peter Hosking, former Chair, opened the evening by reflecting on the Foundation’s initial establishment and our milestones so far. Current Chair, Alan McArthur, then continued spoke about the future direction of the Foundation. 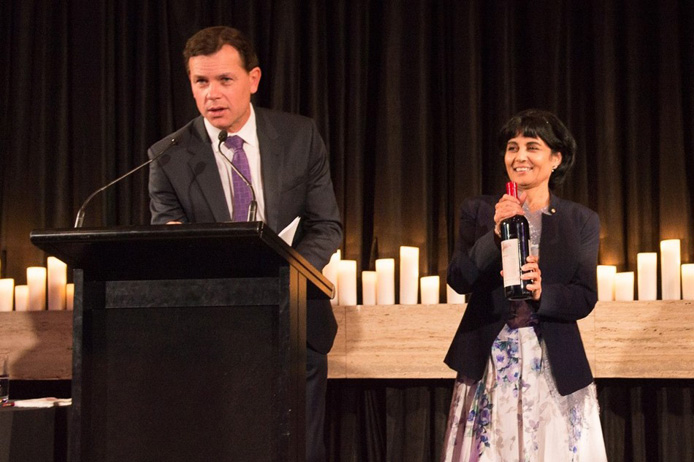 Avner Ambassador, Mark Ferguson, fresh from reading the Channel 7 news hosted the evening's events. Mark was personally touched by the disease when he lost his dear friend, Peter Harvey, to Pancreatic Cancer in 2013. In an insightful interview with grant recipient Professor Minotti Apte, Mark highlighted the importance of raising funds for scientific research into the disease. Professor Apte’s work, funded by the Avner Foundation, has been the first in the world to isolate pancreatic stellate cells and look into new drug combinations that target these and tissue surrounding cancer cells that contribute to cancer growth.

Finally, Co-Founder and Executive Director, Caroline Kelly, reflected on her personal journey over the last 10 years and gave a heartfelt thank you to all the incredible corporate supporters in the room, many of whom participated in the very first Sydney dinner held at Taronga Zoo in 2008.

As always there were wonderful prizes to be won in the raffle and silent auction with a staggering $217,000 was raised from the evening.

The event has been organised each year by Woolworths employees Scott Eames and Donna Patchett, both of whom knew and worked with Avner. As the scale of the dinners has grown, so too has their involvement - we would like to thank them personally for their incredible support over the decade.

A big thank you to our wonderful volunteers for helping out on the night, particularly Donna’s sister Lisa Manzo, another Woolworths employee, who has volunteered at all 10 of our dinners. Thanks also go to Michael Mannington for once again photographing the evening for us.

The evening would not have been possible without the support of Brad Banducci, Woolworths CEO, and the entire Woolworths group. A very special thanks for your ongoing support, and to all our corporate sponsors who attended or helped us out on the night:

Thank you all for your help in Making Survival Possible.

Take a look at the photos from the evening!

Put Your Foot Down Newcastle

Put Your Foot Down Melbourne

Put Your Foot Down Adelaide