We provide a breakdown of Precision Medicine Trials, what they are and why they show great potential, in particular the innovative MoST-P, which could offer new and potentially effective treatments for pancreatic cancer patients. 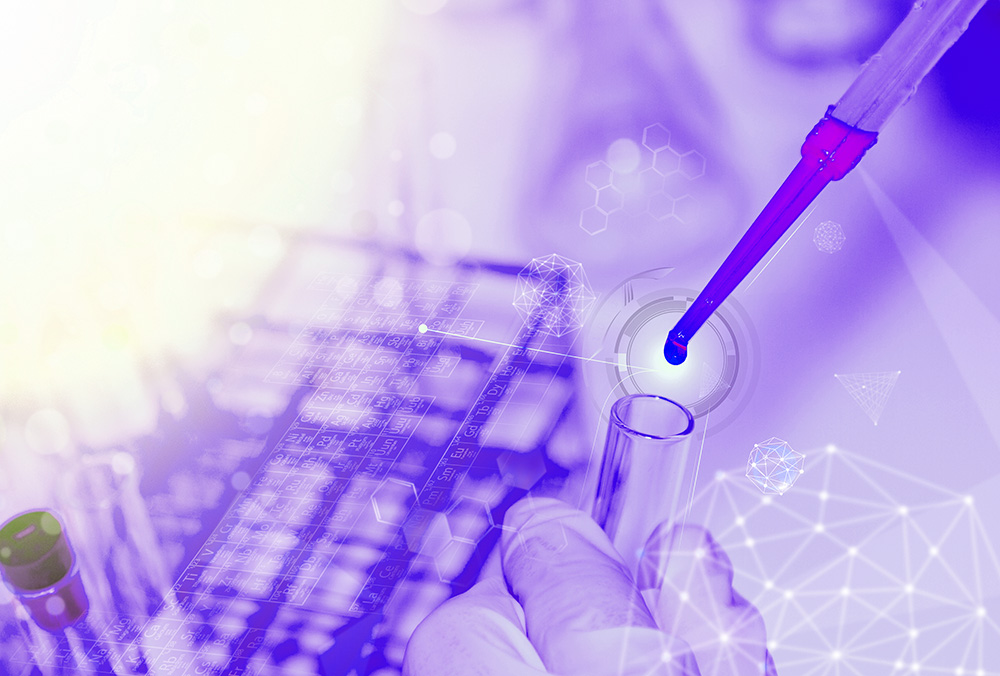 What is precision medicine?

Just as every person is different, so too is their cancer. Precision medicine looks to treat an individual’s cancer by matching specific biological markers, such as genomic changes present in a tumour with treatment that is targeted to those features.

Historically cancer is treated based on its location in the body, its size and what the cells look like under a microscope. While treatments may work for some people, unfortunately it rarely works for everyone with the ‘same’ type of cancer. The individuality between people’s cancer may explain why some treatment work for some and not others.

Precision medicine uses genomic testing, that is, changes across the genetic code, to identify variations between individual’s cancers and guide treatments. Targeted therapies are designed to home in on a specific genomic variation within tumour cells in an effort to increase the effectiveness of treatments and reduce unwanted side-effects of the medication.

What is pre-clinical testing?

Before a medicine can be prescribed by a doctor, it has to go through a number of steps to demonstrate that it is safe and effective. First, a drug or intervention must go through laboratory testing in cells and animal models, known as pre-clinical testing.

Pre-clinical testing is essential to understand how a drug interacts with cells, both healthy and cancerous. It also helps researchers to understand how well the drug hits it’s intended target; how active it is against cancer cells, and how toxic it is to healthy cells. If the intervention looks promising in cells, it is then tested in animal models to better understand how a drug works in a complex system similar to a human’s. Once it has been shown to be safe and effective in these models it can move into human clinical trials.

What is a clinical trial?

Phase 1: clinical trials test the drug, in a small group of people mainly to evaluate its safety and look for early indications that the intervention is working. This will include things like correct dosage and immediate side effects.

Phase 2: clinical trials then study the intervention in a larger group of people to further evaluate its safety and efficacy (whether or not it has worked how it should).

Phase 3: clinical trials compare the new intervention to current treatments to further evaluate efficacy and safety in a larger group of patients. Once an intervention passes a phase 3 trial and is approved by regulators - the Therapeutic Goods Administration in Australia, the intervention can be sold and prescribed for use outside of clinical trials.

Phase 4: clinical trials are conducted after a drug or device has been released to the market for public use. It is often called “post-marketing surveillance”. Phase 4 trials monitor the effectiveness and possible side effects in a general population over longer periods. At this point, phase 4 trials can also be used to determine if the intervention is suitable for the treatment of other conditions.

During clinical trials, researchers need to understand exactly how patients respond to treatments. To do this, they usually compare the new intervention to a control. A control can either be a placebo (something containing no medication) or an established treatment that is already in use. Controls help researchers to assess their intervention accurately. Placebos are rarely used in trials to test new cancer interventions unless there is no standard treatment. Most of the time cancer trials use the best current treatment plus the new drug or without the new drug so patients always receive the best know treatment when they are on a clinical trial.  A committee of people review the proposed control to ensure that it is an ethical option for treatment.

Precision medicine trials seek to test the effectiveness of a potential treatment that is targeted to a specific genetic variant, regardless of where the cancer is in the body. This means that in some cases people may be treated with the same targeted drug even though their cancer is in different parts of the body.

Whilst precision medicine holds potential for better cancer treatments, by further sub-categorising cancers through genetics it can take longer and cost more to run trials for these drugs due to these smaller patient populations.

New clinical trial platforms, such as the Molecular Screening and Therapeutics (MoST) trial are designed to help overcome some of these challenges and more readily test targeted treatments.

The Molecular Screening and Therapeutics (MoST) clinical trials sit between phase 1 and phase 2 and include genomic screening to identify if there are variants that can help guide more targeted treatments. After screening, patients are offered either:

MoST has already shown that genomic cancer profiling can identify treatable options for a significant portion of patients who previously had none.

MoST-P is a sub-study of MoST, which uses the same trial design to test therapies targeted to genomic variations found in pancreatic cancers or targeted to the cancer’s surrounding environment.

Pancreatic cancer patients participating in MoST first have their cancer tested for genomic variations and matched to available treatments. If no matched treatments are available, they will be able to join the MoST-P trials that are currently testing potential therapies targeted to the pancreatic cancer stroma. The stroma is the supportive matrix of an organ and in pancreatic cancer can become impenetrable, making it very difficult for treatments to reach the cancer cells. There are two potential treatments being tested at this stage and both have been shown in experimental models to target the stroma and prevent tumour growth.

The MoST-P trials are a new opportunity for people with pancreatic cancer to have access to new, potential treatments and it is likely that there will be additional options available in the future. 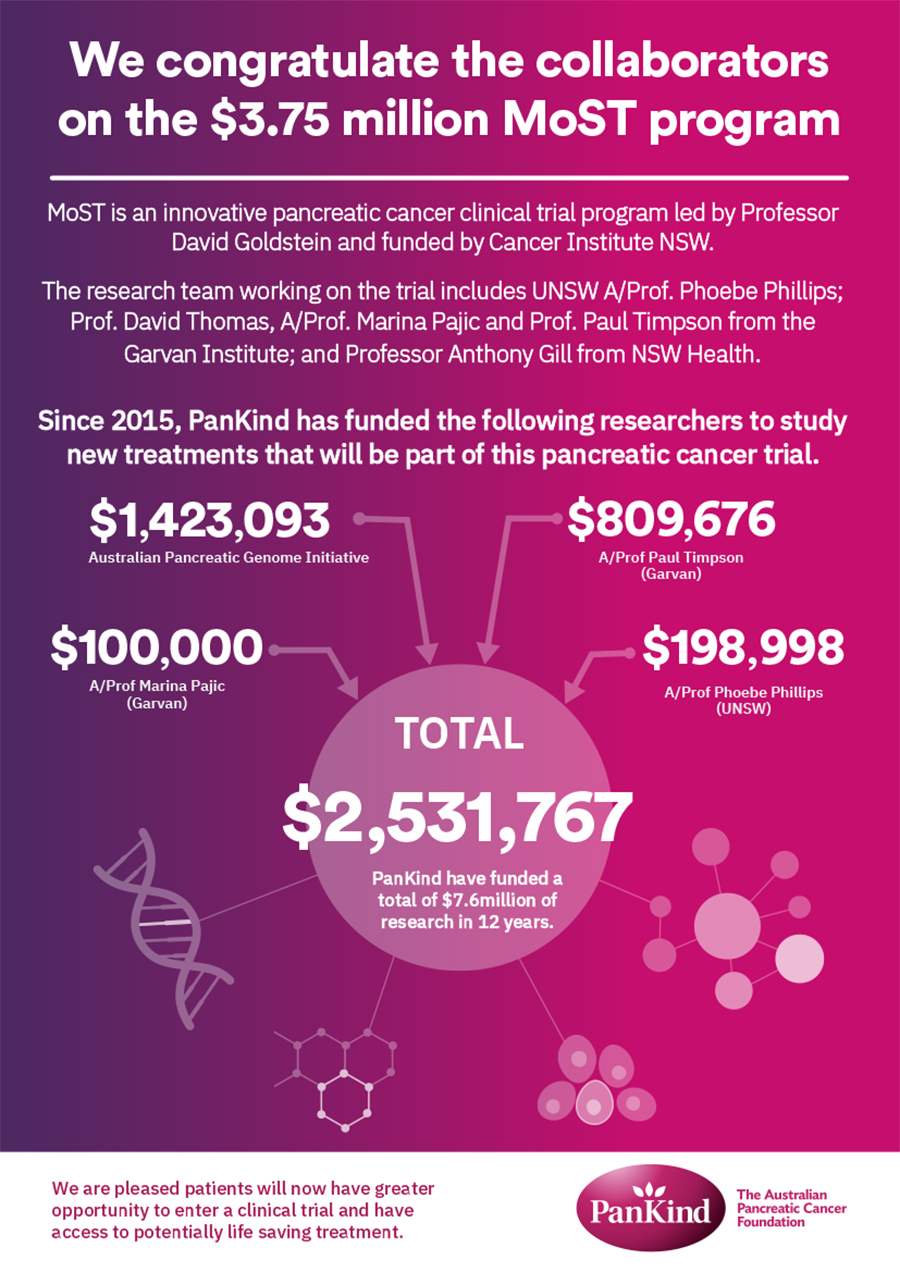 Read more about the MoST-P collaboration and funding in our recent news story.