Home ➞ Who We Are ➞ News ➞ In Conversation with Eric Idle

PanKind was fortunate enough to secure an exclusive interview with the universally loved English actor, Eric Idle from Monty Python fame, about his latest comedy show and surviving pancreatic cancer. 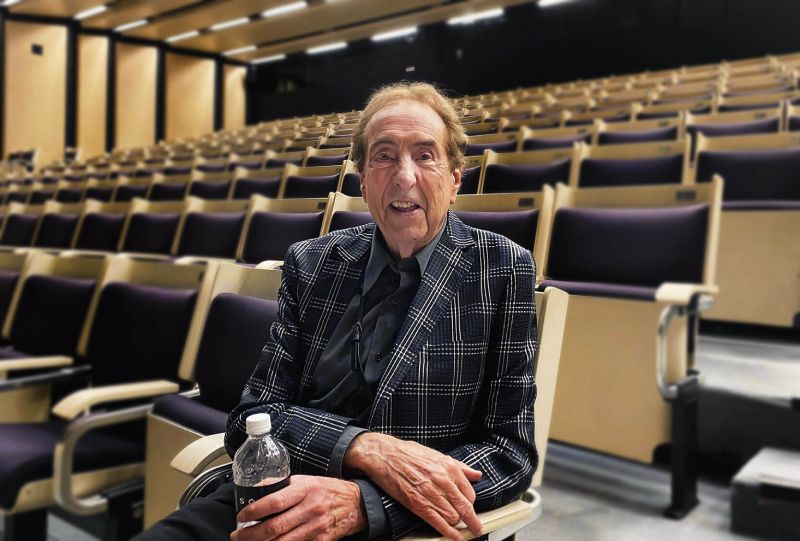 Pancreatic cancer survivor and Monty Python Alum Eric Idle touched down in Sydney earlier this week in preparation for his comedy show ‘Say No More: In Conversation with Eric Idle’ at the State Theatre on December 1st.  He sat down with PanKind to talk about all things pancreatic cancer, early detection, research, and looking on the bright side of life!

Thank you for sitting down to chat with us Eric, we really appreciate it! Can you tell us why you chose a trip to Australia right now? We understand you are here for the ‘Just For Laughs’ program.

Correct! I had promised Adrian, who is the promotor of ‘Just For Laughs’ that I would do it sometime but it got postponed by the pandemic, so this is the first time I have had a chance to do it! So, he’s very happy, and I’m pretty happy too because I love Sydney and my son lives up on the Sunshine Coast so I was happy to visit him!

So, as someone who has personal experience with pancreatic cancer and the disease itself, how important do you feel that early detection and research are to help increase survival?

Early detection is vital, and the research is to show, and find out more about the markers that give us a clue that you have this disease! Personally, I was very lucky because I have a doctor in America who specialises in preventative medicine. So, every year we have a blood test and a check-up, and he noticed that a marker in the blood test was higher than it should be. So, he made me have an MRI and then we looked at it and there it was. So that saved my life. I mean, he said that had I waited another two weeks I would be gone, and I wouldn’t have been able to go to a surgeon. I mean, I think that we are learning more and more every day about all sorts of cancers, particularly pancreatic, and with this learning, we are able to start receiving an early diagnosis.

Do you think your experience would have been vastly different if you hadn’t received that early detection?

Oh, I wouldn’t be here. So, I don’t really know what it would have been like without the detection. When I was writing this musical about Death, I found out that the quickest way to kill someone off was pancreatic cancer. And then 10 years later I was diagnosed, and I believe I laughed when my doctor told me. Because I thought it was funny! Not necessarily funny for you, but it's funny at your expense! Sometimes things are funny but also quite serious. Had I not had that early detection I think my reaction would have been very different.

So, what are some of the things you would tell yourself now looking back, and is this different to something you may tell someone who is diagnosed today?

I mean, you know, I was very fortunate because I had a great surgeon. He was fantastic and was able to cut it all out at once. That’s where early detection is crucial because if it spreads, you’re fighting it throughout your body. So, I think we’ve got to try and spend money on research to try and get simple tests that we can then follow up to see if it is what we think it might be. It’s worth spending money on research, that’s why I like to raise money for it. You’re literally saving someone's life, and I think it’s good for people to know there is a possibility of survival, a little bit of hope.

You are very well known for saying ‘Always look on the bright side of life’. Can you tell me how staying positive maybe helped you through your cancer journey?

I didn’t have to do much, to be honest, you know when it’s found it’s entirely up to the doctors. I was fortunate to have a great doctor who knew a great surgeon. And I think in a way it was kind of helpful that I was in Python because they knew who the hell you are and they don’t want to see you come and die, so that’s helpful! So, I think first, if you want to survive cancer, maybe you should become a comedian, and get famous on television?! There should be easier steps than that though…!!

Absolutely! So, what are your hopes for the future of pancreatic cancer? Obviously, we still have a long way to go. We’ve made some progress, but….

I was at a dinner with Jeffery Archer and everyone at the table had experienced some form of cancer, all were survivors. And Jeffery said he thought that within 30 years we would have it all nailed. And that to me was very optimistic., I thought ‘That’s really great news. You know, our job is to spread encouragement, especially with pancreatic cancer. I have a friend currently dying of it in France, and you know it's heartbreaking because it’s spread all over and he must face that. So, I just do my best to make him laugh every day! I mean the bad news is that we are all dying as soon as we are born, nobody survives or gets out alive. So, you know I think that can be optimistic, it isn’t a pessimistic viewpoint.

Of course! In Australia, pancreatic cancer is the third highest cancer killer. It’s encouraging to see that survival rates have increased, if only slightly, but it is moving in the right direction.

It is yes. Improvement is what we need to see. Having targets are really useful, so we have something to work towards so more people don’t have to suffer from this disease.