"Throughout the entire journey, my boys stayed on my mind and kept me focused; my youngest is now engaged. I didn’t want to miss out on any part of their life. As a person, I am quite stubborn but I think that made me stronger. My doctor said a lot of people would have just given up. I was offered palliative care and said “no thanks”, not today. It wasn’t for me."

“I grew up in a typical family in Western Sydney as a family of 4. My sister and I felt secure, safe and well cared for by our mum and dad and this was the environment I wanted for my own kids.  I’ve spent most of my life adult life caring for my four sons, studying teaching and enjoying my art, organising a number of exhibitions as my boys became men. My family have always been my priority. Art has always been a passion of mine.

My pancreatic cancer journey began in 2017 when I was 54 years old. Actually, you could say it began in 2014 when I was diagnosed with Type 2 diabetes, but no one made the connection at that point. My husband and I were getting organised for our big adventure travelling around Australia in our new caravan and as we would be gone for quite a while, I decided a health check before our departure would be wise.

At the time, I had lost a lot of weight but I had been seeing a dietician, so we thought I was so clever. I went to the gym most days. I did feel a bit tired most afternoons but what women in their 50s didn’t? Who knew what was ahead!

The checks found my calcium levels in my blood to be dangerously high and no one knew why. After a week in hospital to lower my calcium levels the doctor decided I should have a CT scan before I could be discharged. This scan found tumours on my pancreas and in my liver. All this was a huge surprise - the family was shocked – just thought I’d be a responsible adult. No one would have foreseen it!

I must admit I was a little annoyed at the inconvenience of all these doctors and hospitals. The only time I had been in hospital previously was to give birth to my boys and a few minor day surgeries. The seriousness of what they told me just didn’t register at the time. My life was about to change.

After getting over the shock of the diagnosis it was off to see the specialist. The whole process was very slow going, the first conversation with the oncologist shocked me – I was told I had pancreatic cancer and I was being offered palliative care.

I started doing my research and decided on getting another opinion. We were given the name of a surgeon in Sydney, Dr Haghighi at The Prince of Wales. He was upfront and honest; he told me he believed he could successfully remove the tumours and he explained if I decided to undergo surgery I was going to have a long hard year. Since I wasn’t ready to die just yet I decided to go the surgical option. In the space of 7 months, I underwent surgery 3 times. They had to remove the endocrine tumour and I had two more liver resections. Throughout this time I was in and out of hospital whilst they tried to control my high calcium level which was being caused by the tumours, which were also what caused my Type 2 diabetes. Of course, I didn’t know that at the time.

During this roller coaster journey, I had amazing support from my husband Pete, my four sons, my sister and my niece. My sister would turn up at the hospital daily at the same time with a cup of coffee, I could have set my clock by her visits.  It’s fair to say I was in a total state of shock – a lot of the time spent in hospital is a bit of a blur.

I did tend to focus inwards asking friends not to come to the hospital as I guess I’m a little stubborn and selfish and needed to focus on my recovery and not worry about them. To be honest I didn’t want to see pity in their eyes. This isn’t to say that phone calls and texting weren’t a constant reminder of their support and concern and were greatly appreciated. I know Pete and the boys received many home-cooked meals left on the doorstep and calls of support as well. The surgery did take its toll – and at the end of it, just walking around the block was difficult.”

After the final liver resection, I was given the all-clear. My calcium levels returned to normal as well and it did take a while before I started to feel my “normal’ self again. Not just physically but mentally too. Fortunately, no chemo or radiation was required, and I enjoyed approximately two years tumour free. I was even able to talk Pete into getting a new puppy because I deserved it 😉.  Our beautiful puppy Mack joined us in December 2017 and is much loved by all the family.   Neither of us wanted to do the lap around Australia any more so we sold the caravan and went to Europe instead! I absolutely loved it, a great trip and gave me some much-needed positive headspace away from treatment and hospitals. At my regular PET scan check-up, some small spots were found on my liver and treatment began with monthly injections. I also now need medication to control my blood sugar. None of this came as a surprise as my surgeon warned me this would probably happen, so I was mentally prepared for this news. There has been some small tumour growth and I am now in the final phase of therapy. I feel very grateful for every day I have with my family and the outstanding medical care that is available to me.

I have found things that work for me; I am now seeing a naturopath and also do pilates as well as daily walks with Mack. I truly believe that seeing my naturopath and following her advice -as well as following the health advice from specialists complement each other well.

Considering I had no idea what a pancreas was before my journey started, I believe it’s so SO important to tell my story and help people understand the importance of education, health checks and research to find a cure for this awful disease. Early detection is so important to a better outcome. If I left another 5-6 months to have a health checkup, I would not be here now and I am so fortunate I had the scan when I did. I also think research is vital to improve survival - research is everything,  absolutely everything

Throughout the entire journey, my boys stayed on my mind and kept me focused; my youngest is now engaged. I didn’t want to miss out on any part of their life. As a person, I am quite stubborn but I think that made me stronger. My doctor said a lot of people would have just given up. I was offered palliative care and said “no thanks”, not today. It wasn’t for me. 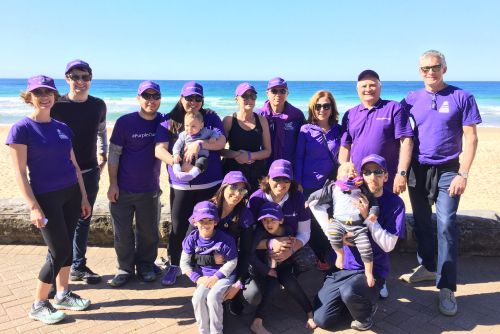